Normal patterns of movement enable your baby to engage in everyday activities such as feeding, playing and moving around. Knowing what is expected is important so that you can help your baby work on his emerging skills, as well as identify deviations from the norm early. Picking up delays early will enable early diagnosis and treatment, leading to better outcomes.

From 4 months onwards, your baby will begin to push up on his elbows in the tummy-down position. This means that he is beginning to engage his core. This is going to be useful later for rolling and eventually crawling. 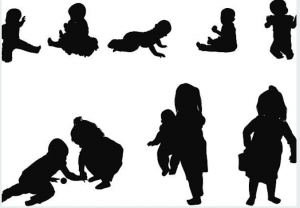 Between ages 3 to 6 months, your child begins to reach out for items with his arms. This is a graduation from just moving the arms and playing with them. He now uses his hand as a functional tool. Baby also learns to hold both hands together in front of him in the midline. He will later transfer objects from one hand to another. Do well to present your baby with activities and toys that are pleasant and have sensory effects. Sensory effects should include sounds, visuals and movement. Also offer to your baby objects with nice textures. These will encourage him to reach out for these objects.

Within the first 6 months some babies will begin to learn how to sit. Some will achieve independent sitting earlier than others.  This is not a problem. You should look out rather for your baby’s ability to keep his head upright or self-supported when placed in a sitting position. If this is not the case by the end of the 4th month, check with your paediatrician.

Your baby may progress from being able to rest on his elbows to including his knees in a four-point kneeling position. Rolling over also starts around this time. Your baby will first learn how to roll from his tummy to his back. Afterwards, he will move on to the more difficult skill of rolling from his back to his tummy. This could happen after 6 months. If your child is struggling to turn over or roll, you should guide him. Place him on a firm mat on the floor. With pillows, initiate the roll by tilting him halfway. Then encourage him to reach further for an object of interest that you have provided. 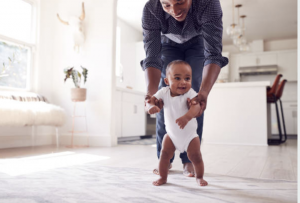 Towards the end of the first 6 months, your baby should begin to bear some weight on his feet when you hold him in an upright position. He is preparing to learn to stand and eventually walk.

Your baby’s movement abilities should be progressive with time. Babies develop at different rates, so you do not need to panic if there are differences from what we have suggested. Bring any deviations to the attention of your paediatrician who will tell you whether there is a true delay. Aside these, other red flags are uncontrolled movements like shivering and jerkiness, stiffness in the joints and floppiness. If your baby is diagnosed of a problem, there are several interventions available to improve your baby’s motor skills. You can also find support from our forum, where there may be other parents like you.

A journey of a thousand miles begins with small baby steps, but before the steps comes a lot of preparation. Engage your baby in fun activities, and present him with many opportunities to practise his developing motor skills. Let’s get moving.