The Truth Behind why your Toddler Hits Others

Your toddler says no and follows it with a tiny fist. Or a bite. Then follow tears. A very familiar sight. As a parent, you may feel embarrassed when your child shows aggression towards another child. You may also feel guilty. But there is a very good reason why your toddler hits.

Your toddler hits because he cannot yet see from the point of view of others. After age 3, it should lessen in frequency as he learns that some feelings can be expressed using words rather than fists or teeth, and that people feel pain and anger when they are hurt. The many reasons why your toddler may hit include

What can you do to help? 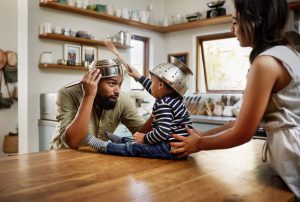 Model good behaviour- if hitting is not allowed, hitting by anyone, not even adults, is allowed.

Sharing is not caring– toddlers are not good at sharing. So don’t put your toddler in a situation where he has to share without preparing him adequately for it.

Hitting is normal toddler behaviour. You don’t like it, but it happens. When it does, don’t freak out. Say firmly that hitting is not allowed because it is not nice and it hurts people, and move on. Hopefully, as your toddler grows, and is able to put his feelings into words, hitting will almost disappear.